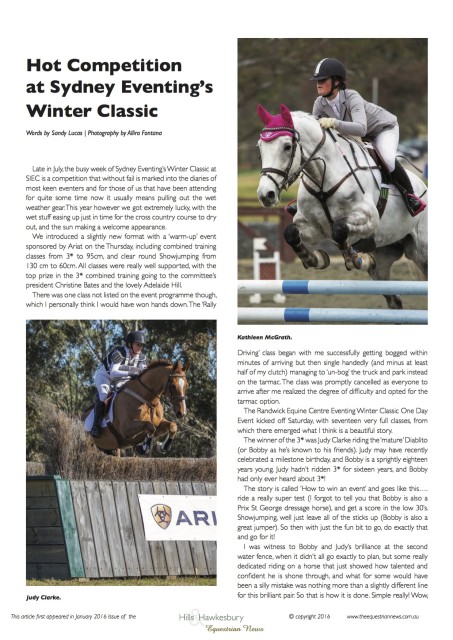 Late in July, the busy week of Sydney Eventing’s Winter Classic at SIEC is a competition that without fail is marked into the diaries of most keen eventers and for those of us that have been attending for quite some time now it usually means pulling out the wet weather gear. This year however we got extremely lucky, with the wet stuff easing up just in time for the cross country course to dry out, and the sun making a welcome appearance.

We introduced a slightly new format with a ‘warm-up’ event sponsored by Ariat on the Thursday, including combined training classes from 3* to 95cm and clear round Showjumping from 130 cm to 60cm. All classes were really well supported, with the top prize in the 3* combined training going to the committee’s president Christine Bates and the lovely Adelaide Hill.

There was one class not listed on the event programme though, which I personally think I would have won hands down. The ‘Rally Driving’ class began with me successfully getting bogged within minutes of arriving but then single handedly (and minus at least half of my clutch) managing to ‘un-bog’ the truck and park instead on the tarmac. The class was promptly cancelled as everyone to arrive after me realized the degree of difficulty and opted for the tarmac option.

The Randwick Equine Centre Sydney Eventing Winter Classic One Day Event kicked off Saturday, with seventeen very full classes, from which there emerged what I think is a beautiful story.

The winner of the 3* was Judy Clarke riding the ‘mature’ Diablito (or Bobby as he’s known to his friends). Judy may have recently celebrated a milestone birthday, and Bobby is a sprightly eighteen years young. Judy hadn’t ridden 3* for sixteen years and Bobby had only ever heard about 3*!

The story is called ’How to win an event’ and goes like this….ride a really super test (I forgot to tell you that Bobby is also a Prix St George dressage horse) and get a score in the low 30’s. Showjumping, well just leave all of the sticks up (Bobby is also a great jumper). So then with just the fun bit to go, do exactly that and go for it! 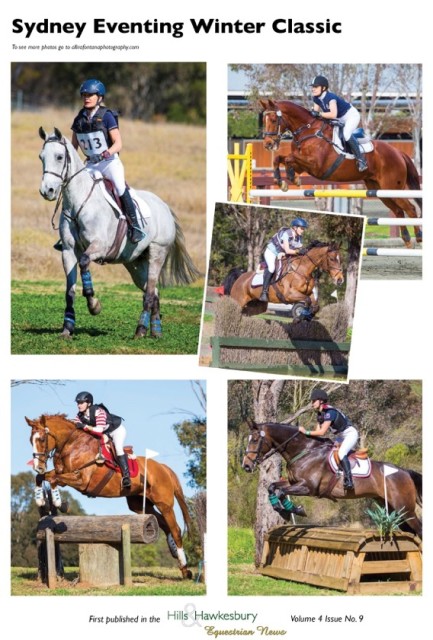 I was witness to Bobby and Judy’s brilliance at the second water fence, when it didn’t all go exactly to plan, but some really dedicated riding on a horse that just showed how talented and confident he is shone through, and what for some would have been a silly mistake was nothing more than a slightly different line for this brilliant pair. So that is how it is done. Simple really! Wow, what a debut and what an inspirational story.

The winner of the 2* class saw a return to the podium for Prue Barrett (Prue has seen a lot of podiums) and her own purpose bred mare Sandhills Special. A new class was introduced this year, the Advanced Intermediate (those that are old enough will remember the term), which is basically a 3* class running over a 2* cross country track, and this was won by Katie Roots on Trevalgar II.

There were two 1* divisions, with Jess Grossman and Belmont Backstage winning the A division, and Jess Rae and Rascal taking out the B class. The 105cm classes, were won by Niki Rose on Wisteria Lane, and Soigné Jackson on Ultimate Velocity. The hotly contested 95cm prizes were taken home by Natalie Blundell, Gordon Bishop and Samantha Pilz. In the 80cm class there were three senior divisions, with the winners being young Sam Fasher, Natalie Shultz and Amelia Brydon. The junior class was convincingly won by Taylor Drayton. The final but undoubtedly exciting class of 60cm (this class is really really hard to win!!) was won by Rowena Mitchell, Josephine Drummond and Jenny Bennett in the professional section. The large junior class was an extremely closely fought out event, with Lucy Batten taking home the blue ribbon.

Congratulations to all of our winners, and of course to all that competed and helped to make for some wonderful competition over the three days. Special thanks also to all of our wonderful volunteers, without whom we wouldn’t be able to run this fantastic event.

And speaking of events, plans are already underway to make the next one even bigger and better. Watch this space for an announcement about exciting new course designers for the lower levels and flash new jumps for all. See you in February!